Every piece we sell, in addition to an initial in-depth review in order to eliminate questionable elements, is subject to a standard scientific analysis test in an independent and recognized laboratory. Those sometimes long and expensive tests are a major guarantee due to our faithfull collectors.
Terracotta is analysed by thermoluminescence, a process which involves the extraction of one to three small samples of terracotta powder. These samples are analysed according to a rather complex protocol which establishes whether the object’s last cooking date (in other words, its manufacture) aligns with the presumed culture and historical period or if its origins are modern and have thus been falsified.
For stone, wood and metal objects upon which thermoluminescence cannot be carried out, the piece is studied under electron microscope to determine two factors: the traces of tools used to carve the object (lithic tools or modern tools) and all deposits which would have attacked the object during its burial (500 to 5000 years in the case of Pre-Columbian cultures). 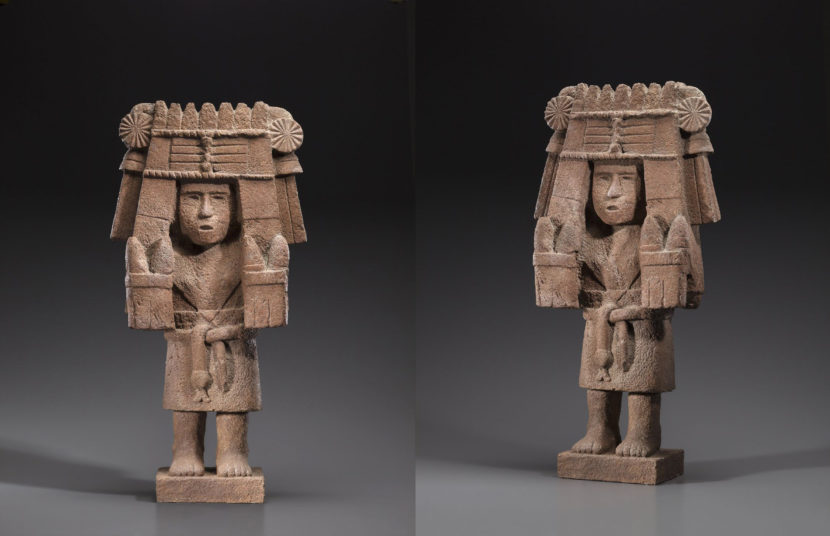 This important sculpture, which is presumed to represent Chicomecoalt, goddess of Corn, and to have come from the Aztec culture of Mexico (1400 to 1500 AD) is the perfect example of a well-executed fake.
It comes from the American collection of the Gentling Brothers and was sold by the New York auction house Bonhams in 2014 where it was authenticated by the expert Fred Backlar.
We carried out a 4-month analysis of this piece in 2015 by the MSMAP laboratory of Pessac; below you will find the report in its entirety.
The analysis, performed exclusively on pieces which had undergone neither restoration nor reinforcement, shows that it is basalt. Without a trace of tools, acid or substances which could have artificially attacked the stone, its authenticity might reasonably be established. On the other hand, review of the presumed oxidation which were revealed, in fact, to be pigments which had not appeared until the 20th century, added to the fact that of the three extracted samples had no alterations to the surface layers or core of the rock (which is impossible, especially with basalt) demonstrates that it must have been carved recently and not during the Pre-Columbian period. It is indeed a very “beautiful” fake, but a fake nonetheless which this careful study has allowed to be taken off the market, thus showing the importance of such systematic reviews.

PDF of the analysis report